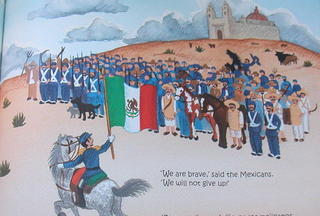 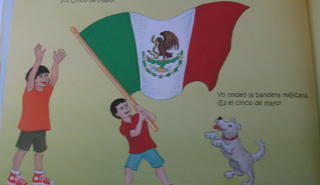 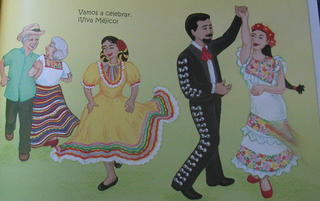 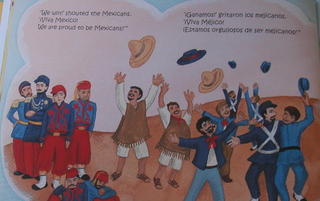 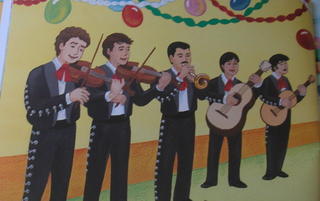 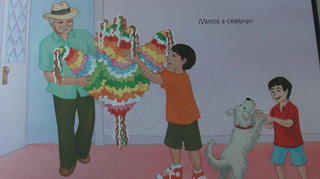 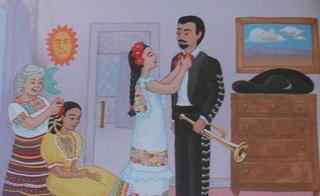 Call me a writer, but I'm really a wizard. Imagination is my "abracadabra,"just watch what I pull out of my hat!

As a child, my favorite book was "The Little Engine That Could." I pumped my fists, chugging to the beat of "I think I can...I think I can."
I grew up believing hard work, confidence and perseverance could make the impossible, possible.

As an adult, I still root for the underdog. The characters in my books face problems, stare them down, and win.

In this book, a small band of brave soldiers defeats a stronger, better equipped army. I wrote this book because I want children to strive; lasso that rainbow, stuff a pocket with falling stars, swallow the sun in a single bite.

Today, I'm still like that little engine;puffing around the bend...

My message to children is the motto of Cinco de mayo:
Si, se puede - Yes, it can be done! 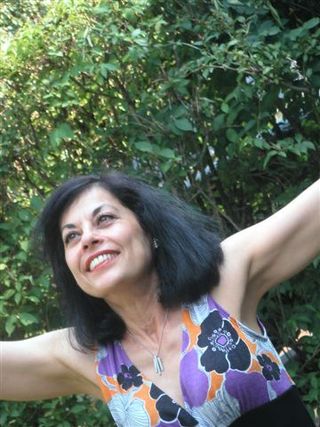 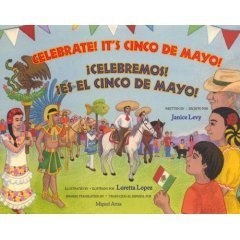 Levy's central text combines a celebration of Cinco de Mayo with a brief recounting of the date's significance: the Mexican army's victory in 1862 over an invading French force. The celebration includes a parade, with Aztec elements featured prominently, a performance of mariachi music, a family meal, dancing and the breaking of the pinata, along with Abuelito(Grandpa) telling the story of the Battle of Puebla. But this is an activity book too. After her main narrative, Levy repeats several of the story's illustrations, leaving out an important element in each and asking the young reader to point out what's missing. The final pages include instructions in making a maraca and a serape, and a slightly longer recounting of the history of the Battle of Puebla. The text is in both English and Spanish throughout, and Lopez's illustrations are bright, lovely and full of details- the Aztec eagle and snake(now part of Mexico's flag), the buttons on the sleeves of the mariachi players' jackets, the multicolored hems of the dancers' skirts.

****Perfectly targeted at young listeners and readers who may have been celebrating Mexico's favorite national holiday without knowing why."

A family demonstrates how it celebrates Cinco de Mayo, as Mama takes part in a parade, Papa plays in a mariachi band, and Abuelito retells the story of the battle of Puebla, which took place on May 5, l862, between the French and Mexican armies, and how Mexico triumphed. Levy provides brief information about the history and the cultural traditions that surround the holdiay. The simple text appears in both English and Spanish. Lopez's brightly colored illustrations add to the festive air of the narrative, and the family's excitement is palpable. The traditional dresses, costumes, and hair styles all enhance the book's authenticity. Appended are craft activities and reproductions of illustrations from the story with items missing(children are aksed to identify them).

Presented in an appealing and accesible manner, this offering will serve its audience well.

This lively, bilingual book with bright and festive oil pastel illustrations tells the true story of Cinco de Mayo and explains the customs and symbolism surrounding it in a way that children and adults will both appreciate. Cinco the Mayo, the Fifth of May, is not, as many believe, Mexican Independence Day. This patriotic holiday actually commemorates the Battle of Puebla on May 5, l982, in which the Mexican army, fighting alongside Zacapoaxtla and Xochiapulco Indians, defeated the larger and better equipped French Army. Though this battle was a surprise victory, Mexico lost the war, remaining under French occupation until l866. A detailed historical note at the end of the book explains all this, adding that historians believe Cinco de Mayo was celebrated even during the years of French occupation, characterizing the can-do spirit of Mexcian culture embodied in the popular phrase 'Si, se puede!', or 'Yes, We can!'
Author Janice Levy, a former ESL teacher and the author of eight other picutre books including "The Spirit of Tio Fernando:A Day of the Dead Story" - also in a bilingual format, understands the importance of making second languages easily accessible and has given young readers a manageable format. With just a few sentences on each page and the enticing illustrations by Loretta Lopez, both children and adults can easily grasp and absorb the translations. The spirit of Tio Fernando has sold more than 50,000 copies and has been used by teachers and librarians across the country for EXL and cultural education. Celebrate! It's Cinco de Mayo is likely to follow in its footsteps.
This book also describes the festivities and customs of Cinco de Mayo for the uninitated, including parades, mariachi music, special foods, pinatas, dancing and more. Games and activities complete the book, helping to sharpen chldren's comprehension skills and expand their experience through creativity and imagination.
Levy has given us another fun, informative and educational book that is reason in itself for celebration.

It's Cinco de Mayo and it's time to celebrate. Mama is walking in the parade and Papa is playing in the mariachi band. Abuelita is making a special meal while Abuelito tells the story of the Cinco de Mayo and why we celebrate this special day. He explains how long ago the Emperor of France got angry with Mexico and sent his army to take it over. On May fifth, l862, there was a battle in Puebla and though the Mexicans were out numbered and out gunned they still managed to prevail and to drive back the French soldiers. That is why Mexcians and many of their friends celebrate May fifth today.
With a simple bilingual text and bright vibrant illustrations the author helps young children learn the basic story about Cinco de Mayo. At the back of the book there is an angaging activity section which encourages children to look at the pictures and to find what is missing from them. There is also a craft.

THOMAS THE TOADILLY TERRIBLE BULLY published by Eerdman's Books For Young Readers
"If I can't make friends," Thomas thinks, "I'll be a bully instead." There's just one problem with Thomas's brilliant plan: he makes a terrible bully. A.toadilly terrible one, in fact.
DIVA DUCK DREAMS- published by ABDO Publishing,
Diva Duck does all of the duck stuff. But her feathers aren't into it. Diva has dreams of life beyond the farm. Diva Duck learns her true talent and her life changes as she follows her dreams. Soon, everyone wants a piece of the duck!

Diva Duck Dreams - published by ABDO Publishing
When you have a dream, anything is possible!
School Rules for Diva Duck - ABDO Publishing
Diva Duck is destined for greatness, so why would SHE need school?
Diva Duck Travels The World - ABDO Publishing
Diva Duck's new CD is a hit and she is off on a world tour. Nothing can stop her. She is one hot duck!
Diva Duck Goes To Hollywood - ABDO Publishing
Diva Duck and her farm animals have returned from their world travels. But Diva isn't happy to be home. she is destined for greatness...and for Hollywood, even it it means going alone!
Flip-Flop and the Bully Frog's Gruff
Don't be bullied! Read how Flip-Flop Frog outsmarts the mean Bully Frogs!
Showtime for Flip-Flop
Do you ever feel shy? Read how Flip-Flop Frog learns that everyone is special in her own way!
Flip-Flop Frog and the Absolutely Awful Baby
Do you have a younger brother or sister? Wish you didn't? Read how Flip-Flop learns to deal with the new baby in the family.
Flip-Flop Frog and the BFF's
Do you have BFF's? Best Friends Forever? Read how Flip-Flop Frog learns about the ups and downs of friendship.
The RL Gang: An Absolutely Awesome School Adventrue
This fall, the RL Gang gives you a rare glimpse into their homes as they get ready for a field trip they will never forget. As the kids explore an awesome new land, they learn the importance of compassion and lending a hand.
GONZALO GRABS THE GOOD LIFE published by Eerdman's Books For Young Readers
After Gonzalo, the Rooster, won the Loteria, he pecked the farmer, don Chucho, on the butt."I'm rich!" he said. "Get another rooster. I quit!"He hopped off the roof. "This rooster stuff is nothing to crow about. It's time to grab the good life!Adios!"And off he went...follow him as he tries to live la vida loca!
ALLEY OOPS!
A bully learns his lesson from arm wrestling Hammer Hand Man!
THE RUNAWAY RADISH ...published by Raven Tree Press...
It's the Night of the Radishes in Oaxaca, Mexico. Will don Pedro win First Prize in the Radish Carving Contest? A radish jumps out of his hand and rolls out the door, singing, "Places to go, people to see...Out of my way, you can't carve ME!" What will happen next?!
Finding The Right Spot: When Kids Can't Live With Their Parents
What happens if you can't live with your parents?
I REMEMBER ABUELITO/YO RECUERDO A ABUELITO published by Albert Whitman and Co.
A Day of the Dead Story in a bilingual format for the younger child. "Abuelito's spirit will come like a butterfly," Mama says, "quiet and beautiful. You will feel him in your heart.""What if Abuelito's spirit gets lost?" I ask."His spirit is like the butterflies," Mama says. "They come to our town every year- they don't get lost! Abuelito's spirit knows the way, too."
The Spirit Of Tío Fernando: A Day of the Dead Story/El espíritu de tío Fernando: Una historia del Día de los Muertos
Preparing to celebrate the Day of the Dead, Nando remembers all he liked about his favorite uncle
Abuelito Eats With His Fingers
Tina doesn’t like to visit her grandfather. Will she learn to appreciate a grandfather’s love?
The Man Who Lived In A Hat
There once was a man who lived in a hat. Don't ask. Things happen.
Celebrate! It's Cinco De Mayo!/ Celebremos! Es el cinco de Mayo!
It's Cinco de Mayo! Mama marches in a parade. Papa plays in a mariachi band. Abuelita cooks a special meal. Abuelito tells the story of the brave Mexicans who fought so long ago on this day. I wave the flag. Viva Mexico! Simple crafts and "find what's missing pictues" add to the celebration in this happy holiday book.
Totally Uncool
What if your dad found a new girlfriend - one who was completely, totally uncool?